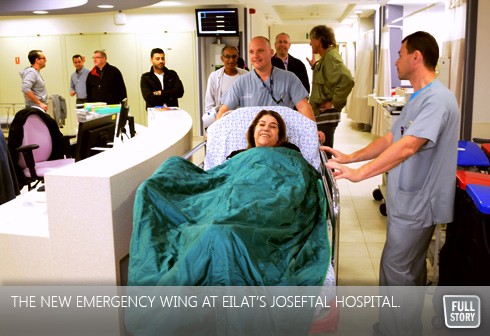 Healthcare services in Israel’s “deep south” received a major boost recently with the opening of a brand new, much-needed emergency room at Yoseftal hospital in Eilat.

“Yoseftal is the only hospital for miles around,” says Dr Avi Goldberg, Director, Yoseftal Hospital. “The nearest other hospital is in Be’er Sheva, 250 km away. In addition to providing medical care to the 55,000 people who live in Eilat, we serve the 2 million tourists who visit Eilat every year, as well as Israeli soldiers serving nearby.

”The hospital’s old Emergency Room, which was built more than 40 years ago, was small and dilapidated, and had only eight treatment stations.

“Unfortunately, Eilat has had more than its fair share of both traffic accidents and terror attacks,” says Dr. Kobi Arad, Director of the ER. “During mass casualty events, we had no choice but to treat patients in offices and lounges.“

The new ER, by contrast has 30 treatment stations, including special pediatric stations, two isolation units, and a spacious triage area.  The state-of-the-art facility boasts Israel’s most advanced trauma center and is the first in Israel to have a fully digitalized medical records system.

Construction of the new ER came as the result of a partnership between UJA Federation of Greater Toronto, Clalit Health Services (which owns the hospital), and the Ministry for the Development of the Negev and the Galilee.

The new ER is but one component of a major facelift for Yoseftal.  Other departments are being renovated, and many new doctors have joined the staff, including new heads of surgery and orthopedics.  Attracted by Yoseftal’s advanced facilities and spirit of rejuvenation, they have brought their considerable expertise with them, enabling the hospital to offer complex new treatments.  An initial incentives program designed to recruit new medical staff was funded by UJA Toronto, which has also supported advanced training for doctors and nurses already employed at Yoseftal.

In March, Yoseftal received the prestigious Quality and Safety Seal of the American JCI (Joint Commission International).  The hospital is recognized as a teaching hospital for medical students from Ben Gurion University in Be’er Sheva and Columbia University Medical Center in New York.

“UJA Toronto’s visionary support of Yoseftal has been a major catalyst for the hospital’s development, and has helped to revolutionize the level of service for locals,” says Dr. Avi Goldberg.

The long-term strategic aim of UJA’s efforts to upgrade medical care in the region is to create significant demographic change, by attracting skilled newcomers and raising the quality of life for all residents.