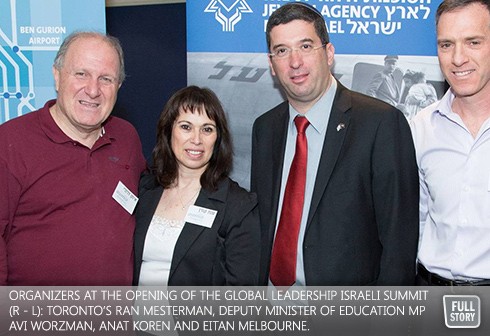 UJA volunteer one of four organizers of London conference

By Dan Horowitz--In late March, 2014, 70 Diaspora Israelis from around the world came together under one roof for the Global Israeli Leadership Summit in London.

The common goal shared by all participants was concise and ground breaking; the government of Israel must recognize that the Israeli communities in the Diaspora are an integral part of the Jewish people, who believe in their ability to contribute and drive for a change regardless of where they choose to lead their lives.

And, according to Mesterman, it seems that the Conference, held from March 28 to 30, came up with some solid solutions.

“As a result of this summit, Israelis in the Diaspora, for the first time will reach out to Israeli leaders in every Jewish community around the globe, build and encourage education and Jewish identity among second and third generations, cultural and educational collaboration between the Israeli communities in the Diaspora, building a global Israeli business network, attract Israeli philanthropists to participate and introducing the Israeli community initiatives to the local Jewish communities,” said Mesterman a 51-year-old Tel Aviv native and father of three who established UJA’s Israeli fundraising campaign and let the organization’s Developing Communities Committee.

“The Jewish Federation of Greater Toronto is a true partner for the Israeli Community and a great model for other communities around the globe to follow,” adds Mesterman. “Both Jewish and Israeli communities should collaborate with each other, so the second generation can follow them. Israeli leadership, Israeli communities, local Jewish communities and the state of Israel must handle the challenges of building Jewish and Israeli identities among second and third generations living in the Diaspora. We are welcoming every Israeli leader around the globe to contact us and to become a member in this unique initiative.”

“In the past year, Israeli government has focused on its obligation to strengthen its relationship with Israeli communities around the world. If Israel is not able to find a solution to this problem, it does not do its job properly,” said Israeli Knesset Member and Deputy Minister of Education, Avi Wortzman, who attended the conference.