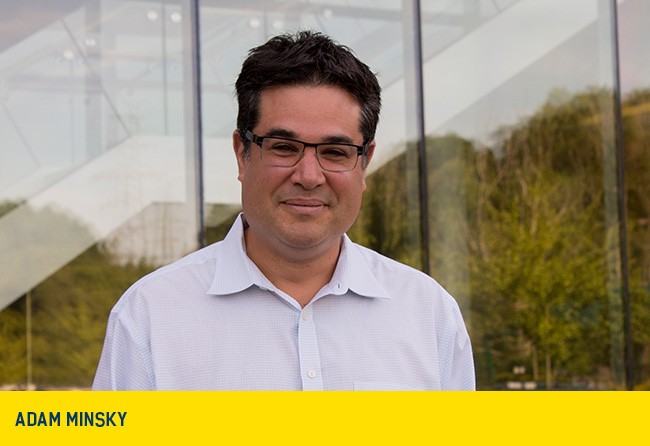 The day after his successor was announced, Morris Zbar, outgoing president and CEO of UJA Federation of Greater Toronto, joked that he’ll “ride off into the sunset feeling very good about the future of [the organization’s] leadership.”

The federation announced June 6 that Adam Minsky will be taking over as president and CEO Aug. 2, when Zbar, 68, retires.

Zbar, who stepped in as CEO two years ago to replace longtime head Ted Sokolsky, who retired, said he’s pleased the job is going to an internal candidate. Minsky, 45, has worked as the organization’s senior vice-president of community capacity building since 2007, and prior to that as vice-president of the federation’s Israel and overseas department.

Born in Montreal, Minsky has lived in Toronto since 1978 and has worked at UJA Federation since 2005.

Most recently, he led the development of the federation’s strategic plan for the future, and, as he told The CJN, rather than implement a totally new agenda, as CEO he’s looking forward to carrying out the plan, which he’s been working with fellow staffers to develop over the past two years.

“I’m highly invested in this plan and see it as a strategic road map for how our community can emerge much stronger over the next five years,” Minsky said.

He explained that the plan has two distinct components, one that addresses how the federation needs to evolve as an organization and the other that addresses its work in the community.

Part of the plan is to engage younger people – whom Minsky called the “under-40s” – in leadership roles in federation and the agencies it supports, as well as trying different approaches to fundraising and establishing clear messaging that will “strengthen the organization as we go forward.”

Externally, he said the federation is going to work with its affiliated agencies to expand and strengthen its impact.

For example, it will work with grassroots community groups and schools on strategies to reduce the cost of Jewish education and make it more affordable for middle income Canadians, Minsky said.

And starting this fall, the federation will begin implementing poverty reduction strategies it’s been working with a consortium of social service agencies to create.

Another element Minsky plans to build on is ensuring Jewish students feel safe on university campuses.

Minsky noted that Hillel of Greater Toronto recently merged with the various Hillel branches across Ontario universities under the umbrella of Hillel Ontario. Further, the Centre for Israel and Jewish Affairs, the federation’s advocacy partner, has devoted a lot of resources to training Hillel Ontario student leaders through trips to Israel and mentoring by academics.

Minsky said he’ll continue to work to bolster Hillel Ontario as it works to release its own strategic plan at the end of the summer that will “take Jewish student life to the next level on campus.”

“In September, we’re going to be bringing on a talented leader who will be part of UJA Federation’s management team and whose sole focus will be working with the under-40s,” Minsky said.

He added that federation will make sure the voices of younger Canadians are represented across the organization’s committees and decision-making bodies, so that they’ll be an integral part of influencing the way both the organization and the community develops.

He said the federation has “gotten off to a good start” with initiatives such as the new JCC Schwartz/Reisman Centre, which is heavily used by Russian and Israeli Jews, and offers a number of programs that target these groups.

“But we still have a ways to go,” Minsky said.

Having gone through the public school system in Toronto, Minsky said he began volunteering with federation as a teenager and got involved in Israel experience programs first as a participant and later as a staff member.

He started a doctorate in Jewish history in Poland, but after taking time off to join the founding professional team of the Canada-Israel Experience and its Birthright Israel programs, Minsky said he “fell in love with the work and never looked back.”

Zbar noted that Minsky was selected by a search committee that included federation board members and key community philanthropists, and was picked from a pool of global candidates, including some in Israel.