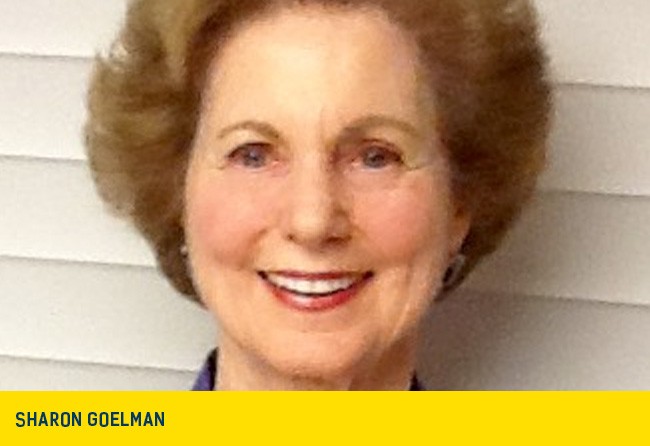 Sharon Goelman, who in 1962 moved from her native Montreal to Ottawa as a newlywed with her husband of almost 54 years Louis, has been involved in education – in one form or another - for much of her life.

As a young woman in Montreal, she had taught Sunday morning Hebrew School at Temple Beth El, afternoon Sunday School at the Chevre Kadisha Synagogue and helped kick-start a still operating Jewish Day Camp of which she was co-Head Counsellor. Later, with her friend Mena Glustein, Sharon taught the bat mitzvah courses at Shaare Hashomayim Synagogue in Westmount. In 1959, Sharon won a Jewish Theological Seminary Scholarship to Camp Ramah’s MADOR Program in the Poconos and the following year gave courses and was a counselor at Camp Ramah in Utterson, Ontario. As a graduate of the Hebrew Teachers College of Montreal, she taught at Young Israel Day School on weekdays, and, during evenings, attended Concordia University, concentrating on Art history and World Religions.

In Ottawa, where the couple’s first son, Ron, was born, Sharon taught Hebrew Kindergarten half days at Hillel Academy, and evenings, continued with Art history Classes at Ottawa University and the National Gallery of Canada.

In 1966, the couple returned to Montreal, where their son Chuck was born. The busy mother of two stayed at home to look after her children. All part-time, Sharon managed to complete her undergraduate and graduate degrees in Art History at McGill and Concordia University. She wrote her thesis on William Raphael, R.C.A., 1833-1914, the first professional Jewish artist to practice in Canada. For Concordia’s Department of Religion, she originated and taught a groundbreaking undergraduate course called “The Jewish Experience in Art”, covering the post-biblical period to the 20th century - the first course of its kind in Canada.

Annually, for 12 years, she also taught two Canadian Art History courses at the Saidye Bronfman Centre of Fine Arts and served on its Museum Board for the last ten.

As her main job, Sharon headed the Art History Department at Marianopolis College, offering over the years courses from Pre-historic to Modern Art. After her first two years thee, the Dean invited her to initiate the first course on Judaism in the history of this Catholic college, which she enjoyed teaching each semester alongside of her Art History courses until she left for Toronto.

Despite all of Sharon’s educational experiences, not long after she returned to Montreal from Ottawa, she embarked on a new, unexpected career. Her close friend Connie Solomon, who was slated to be the Area Chairman of the district of Westmount for CJA Montreal (the equivalent of UJA of Toronto) had just received doctor’s orders to stay in bed for the duration of her pregnancy. She delicately asked Sharon if she would help her out by taking over her commitment.

“I knew absolutely nothing about fundraising; the only experience I had was gathering a few cards of colleagues at Hillel Academy in Ottawa. This new experience would involve ‘house-to-house’ calls. Scary! I didn’t want to refuse Connie so I said I would at least try. To my amazement, I not only managed to cover the many cards and associated house calls, but I loved meeting the interesting donors,” said Goelman. “It also just felt good to help out our Jewish community. To my own amazement, I had experienced tremendous satisfaction so I agreed to take on positions and cards every year thereafter.”

Sharon and Louis left Montreal, heading west on the 401 to Toronto in 1985 so that Louis, the former Vice President of National Drug and Chemical of Canada, could start his new Executive Vice President position with Shoppers Drug Mart.

Sharon found work at the McMichael Canadian Art Collection in Kleinburg, then her favourite museum in the Greater Toronto Area. She worked there for years.

“As soon as I arrived in Toronto, I called UJA and told them that I wanted to get involved,” says Sharon. “I became a canvasser, then an Area Chairman, up unitl my mother in Montreal became ill; then I stepped down to be a Captain and canvasser. I feared that if I gave up UJA for one Campaign, I might never find my way back, so I just kept going. Now, 31 years later, I already have my slate of donors to approach for our upcoming Campaign season.”

Sharon, with the unconditional love and support of Louis, (who was also heavily involved in volunteering and fundraising), has become one of the most successful, passionate and voracious UJA canvassers in the history of the organization, a fact that has not been lost on UJA leadership who, during the UJA Women’s Philanthropy Installation, named her as UJA’s Volunteer of the Year.

“Sharon's commitment to Israel, our community and to UJA's Women's Philanthropy in particular, is spectacular,” says Susan Jackson, Executive Director, UJA’s Women’s Philanthropy. “Last year we honoured Sharon for her 51 years of UJA canvassing – including her work in Ottawa, Montreal and here in Toronto - which clearly shows her understanding of the community's needs and how deeply she cares. There is no more worthy recipient of the UJA Volunteer of the year award than Sharon.”

“I believe that we are all put on this earth to be of support to one another and I feel privileged to be in the position to be able to help UJA with its impressive collective fund that makes our community strong and cared for,” says Goelman. “We need more volunteers, young and old and I hope many come forward. I hope one day my grandchildren might choose to become involved in volunteerism in our community. My experience has been that its reward of satisfaction is greater than the time and energy invested.”