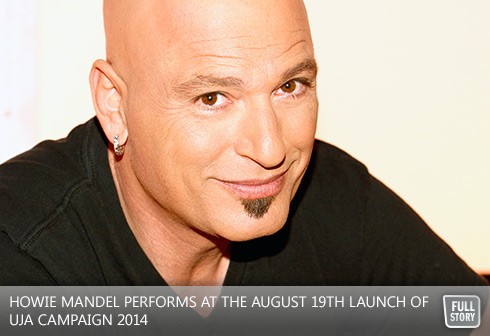 By Daniel Horowitz--The way Howie Mandel tells it, his show business career started long before he took to the stage of Yuk Yuks’ original Yorkville location in the early 1980’s.

"My first foray into show business was actually my bar mitzvah, although I didn’t realize it at the time," says the Toronto native, and judge on “America’s Got Talent”. “My first act was my haftorah, which I’m ashamed to say, I didn’t write. I admit that it was lifted from other people’s writing.”

Mandel is returning to his Toronto stand-up roots as the featured guest at the launch of United Jewish Appeal’s Campaign 2014 on Monday, August 19th, at the Westin Harbour Castle.

And, it’s an evening that Howie – and Terry, his wife of 34 years, – are looking forward to, albeit for very different reasons.

“Any time I come home to Toronto, where I still maintain a home, I’m thrilled,” he says. “I look at every performance as a party, and I’m just trying to be the centre of attention. So, as a Toronto Jew, to be invited to perform in front of my peers and my fellow Canadian Jews is a real blessing.”

As far as Terry is concerned, his UJA invitation offers the couple other benefits.

“I’m lucky to be with Terry, a woman who is as beautiful inside as she is outside, but most importantly, who puts up with me. If you ask her why our marriage is a success, she will tell you it’s because of the 200 stand-up comedy gigs I still play every year, around the world. In fact, she’d personally like to thank UJA for inviting me, and for getting me away from her for a couple of days. She likes it when I go away.”

And regardless of his other show biz responsibilities at any given time, stand-up is not something he’ll ever give up.

“Everything I have achieved in my career comes back to stand-up comedy,” he says. “It’s the seed of everything I do, or will do in the future. Stand-up is what got me there, and it’s the primal scream at the end of the day. It’s the only thing that I do that has no limits, no boundaries, no marks to hit, no lines to recite and no commercials to throw to. I’ll never stop performing stand-up because it is the only thing that keeps me honest. There’s nothing like facing the fear, and having the fun, that goes with performing in front of a live audience.”

“I am proud of my heritage, I’m proud of where I come from, and I’m proud of who I am,” he says. “When I landed in Israel, I immediately felt like this is where I was supposed to be.  However, we waited 40 years to get there; I took me an 18-hour flight, so I feel like I cheated. Israel stands for so much more than just Judaism. It is the epitome of everything that North America and much of the world strives to be in terms of democracy and freedom. Israel is this little pit bull surrounded by her enemies, and yet, it is strong enough to not only hold its own, but to flourish. It’s just a great place to be.”

Another great place to be is Toronto’s Westin Harbour Castle on Monday, August 19th for what promises to be an unforgettable evening.