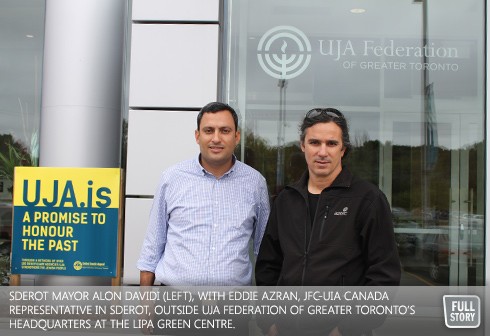 By Daniel Horowitz--Alon Davidi, the mayor of Sderot, a small Israeli city less than a mile from Gaza, likens the relationship between his town and UJA Federation of Greater Toronto to that of a brother and sister, and as the father of two boys and five girls, Mayor Davidi knows a thing or two about siblings.

“Someone once suggested that our relationship is like parents and children, but UJA Federation is our partner, not someone who, like a parent, tells their children what to do and when to do it,” says the 40-year-old native of Beersheva during a recent visit to UJA’s headquarters at the Lipa Green Centre on Sherman Campus. “They are strategic, knowledgable, and work together with us, based on our needs.”

UJA Federation teamed up with Sderot – making it its partner community - in 2006.

“For us, we are in front of the war with Gaza, and we realize how important it is for us to be strong so that Hamas cannot destroy us, and move closer and closer to other parts of Israel,” says Davidi. “It’s not always easy, and many times in the night we shed tears, but in the day, we know that we are strong and that the people of Sderot, and all of Israel, were created to bring good to the world, and we are born to live and see our children grow up to a better future."

On April 16, 2001, the first Kassam rocket was fired at Sderot and, the rest, as they say, is history. It’s now been over 13 years of unrelenting terror attacks being perpetrated against the innocent civilians of this close-knit and patriotic town.

UJA Federation of Greater Toronto has been investing in the infrastructure – and the people – of Sderot since 2006, while maintaining a presence on the ground there, regardless of cease-fires, and through both good times and bad. UJA is there to stay.

Some of UJA’s long-term investments in Sderot paid some vital dividends during this summer’s war.

“In 2006, UJA invested in a Sderot young leadership program,” says Davidi. “Those who were in the program, these incredible teenagers, played a key role in our city this summer, assisting in the bomb shelters and safe rooms across the city, helping so many deal, as best as they could, with what was going on around them. UJA’s Israel Emergency Relief Campaign this summer brought special funds to us during the war, ensuring that trauma services were available to the men, women and children of Sderot, as were services for our seniors and other citizens in need. Thanks to UJA Toronto, we were also able to ‘help the helpers’, by providing activities away from the line of fire in Sderot, and a chance to breathe.”

Money raised through UJA’s Annual Campaign has benefitted Sderot since 2006 and will continue to do so. UJA has strengthened the city’s educational system with the best facilities, and fortified the roof on its community centre.

“There is another war we face in Sderot, and that is the battle to make sure that my town not only survives, but develops. We will continue to work with UJA to make Sderot even stronger and more resilient; a town that Hamas will see and realize that we are not going anywhere. This is our home, and we will stay and defend it.”