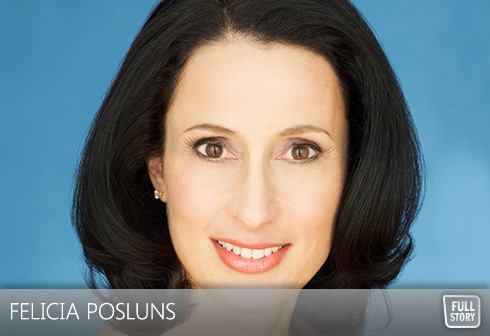 By Daniel Horowitz--From September 7th to 10th, a pride of Lions came together in the heart of New York City.

Fortunately for the citizens of the Big Apple, these particular Lions were among the most passionate and philanthropic Jewish women from across the globe.

The occasion was the 2014 International Lion of Judah Conference, and, one Lion in particular did Jewish Toronto – and UJA of Greater Toronto – especially proud.

The Lion of Judah is a special UJA society representing generous and visionary Jewish women who make a great commitment to philanthropy by reaching specific annual giving levels, while inspiring others to do the same.

During the conference, Toronto’s Felicia Posluns was named the recipient of the prestigious Kipnis-Wilson Friedland Award - named for Lion of Judah founders Norma Kipnis-Wilson and Toby Friedland z”l - which honours the most inspiring women in their respective communities.

Winners are chosen by peers as "women of valor" with a lifetime of commitment to the Jewish world. Each is recognized at the biennial International Lion of Judah Conference (ILOJC).

“I am truly blessed, humbled and honoured to be named this year’s recipient of the  Kipnis-Wilson/Friedland Award,” said Felicia. “As with so many women in our community, volunteering for UJA is one of the most important commitments I make.  Doing what we can to ensuring no one is left behind, that Israel is a focus of our identity, and that Jewish education is as wide spread as possible, all leads to enriching the heart of our Jewish souls.”

Felicia, an Emerald Lion and a LOJE, is an acknowledged role model and leader in Toronto’s Jewish community. Her accomplishments are too numerous to list, but she is especially proud of chairing UJA Women’s Philanthropy Campaign in 2012, and Lion and Atarah in previous campaigns. Currently, she co-chairs UJA’s Major Gifts and will Chair UJA Campaign 2016 along with Shoel Silver.

Israel is central to Felicia and her family’s identity, and she has chaired and co-chaired Women’s Division’s Israel Bonds and the gala for the Association for the Soldiers of Israel (ASI/CZCA). Felicia energized the entire community as co-chair of the UJA Walk with Israel Festival in 2003 and 2004 and Walk with Israel in 2005 and 2006. Felicia also serves on the steering committee of the gala for the Canadian Society of Yad Vashem.

“This award honours the most inspiring women in our community, so it’s clear to me why Felicia was chosen,” says Alison Himel, Chair, UJA’s Women’s Philanthropy. “Felicia really is a role model for me and so many people in our community.  She is a warm, inclusive, dedicated, and passionate volunteer and leader -   who leads by example.”