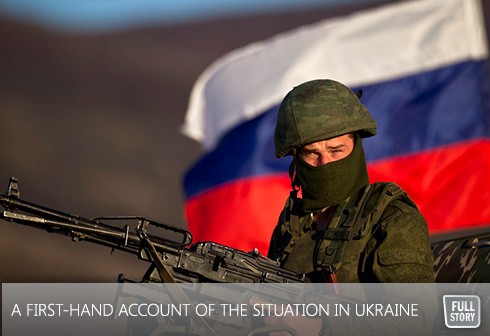 In short, there is tension in the air, especially in Kharkiv, which is 40 miles from border with Russia.  People seem very nervous.  In Dnipropetrovsk especially, one sees many Ukrainian flags, patriotic billboards.  Nurses have been called up for two days of military medical training, physicians have been asked to register with authorities so that they can be mobilized if need arises.

In Kharkiv, people joke nervously about the "political tourists" who crossed the border from Russia.  They are masquerading as students, said the Hillel director, but they don't act like students.  Perhaps they are students of KGB academy.  Every weekend they stage pro-Russia demonstrations in the city.  Who is paying for their "vacations"?  What do they do between Monday and Friday nights?  (Ukraine has closed the border in response to "tourist" influx, but some political tourists remain.). Some people in Kharkiv report increased crime, speculating that police are distracted by need to monitor political tourists.

Israel consulates in both Dnipropetrovsk and Kharkiv are overwhelmed by vastly increased number of people who are checking eligibility for aliyah. Responding to increased demand, Jewish Agency has added ulpan classes throughout eastern Ukraine.

So far, pensions are being paid on time.  However, general inflation has been running at 20 percent - Krivoi Rog hesed reports 40 percent increase in cost of food provided to clients - and will increase more as cost of utilities rose 50 percent on April 1 and medicines increased 30 to 100 percent.  Value of monthly pension decreased from $220 to $161 in last six months in Dnipropetrovsk.  Independent observers say government is not reimbursing hospitals for services provided - or is not reimbursing them on time - and, therefore, hospitals are reducing services.

New JDC directors in both Dnipropetrovsk and Kharkiv - both are Israelis, both very impressive.  Hesed directors are local people, all veterans, all seem very competent.  New JAFI directors in Dnipropetrovsk, an Israeli couple who cover all of eastern Ukraine.  They arrived Sunday evening, I met them Monday morning.  They are natives of Dnipropetrovsk and seem well-prepared.  They have made a good impression on Rabbi Kaminezki here, which is very important.

The weather here has turned very cold.  Reminds me of Chicago.

Betsy Gidwitz is a lay leader who has been studying and writing about the FSU for some 30 years. She heads up the Committee on the FSU countries for the Jewish Agency for Israel.