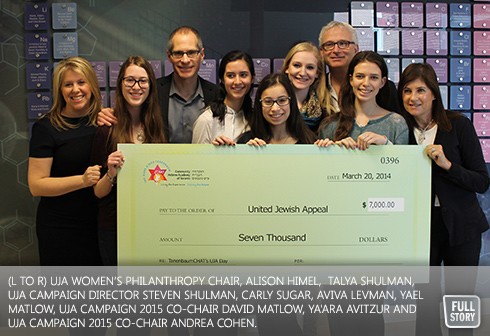 By Dan Horowitz--Whoever coined the phrase “youth is wasted on the young” obviously never met the students at the Anne and Max TanenbaumCHAT Wilmington Avenue Campus.

The philanthropic-minded teens recently held their annual UJA Day fundraiser and awareness program, and thanks to their creativity, energy, and collective desire to make a difference in the Jewish world, an impressive $7,000 was raised for UJA’s Annual Campaign 2015.

“It's always exciting to see our school community rally behind an important organization such as UJA,” said Josh Sable, Director of Student Activities, TanenbaumCHAT Wilmington Avenue Campus. “Our student leaders ran an outstanding program that was creative, educational and inspirational. It's important for the Jewish youth at our school to continue to find ways to connect with the larger Jewish community. Ultimately, today's Jewish teens are the future leaders of our Jewish community and we're fortunate to have an amazing core of future leaders here at TanenbaumCHAT.”

“It was a really great experience being heads of the UJA day committee at CHAT this year,” enthused Yael Matlow. “Being on the organizing side of a fundraising event was hard work however the planning part was fun and the results were extremely rewarding.”

“We feel that it's very important for people our age to begin to make a contribution in our community and are so glad that we had this opportunity,” said Talya Shulman.

Raffle tickets were also sold for to students and school staff with winners landing great prizes including tickets to a Toronto Maple Leaf game, an iPad, Lulu lemon gift cards and much more.

At lunchtime, students purchased Bingo cards to play for a chance to win Maple Leaf playoff tickets.   The Student Chairs also created a creative and informative video and display for the student body featuring educational material about UJA and the more than 100 partner agencies and schools the organization supports.

"So many of our fellow Jews are helped by programs funded by the UJA Campaign," said Yael’s proud father, David, who is co-chairing the 2015 UJA Annual Campaign with Andrea Cohen. "In our own city, 12 percent of Jews live below the poverty line. All of us who can should do our part to help Jewish people in need. It is a proud moment when our children realize they too share this responsibility.”

Talya Shulman’s father Steven Shulman, who is also UJA’s Campaign Director and Counsel, expressed his pride in the students’ leadership and the school. “I know that these TanenbaumCHAT students made independent decisions to take on this responsibility. Their leadership is a result of the wonderful Jewish values reinforced by a school which UJA’s Campaign proudly supports.”