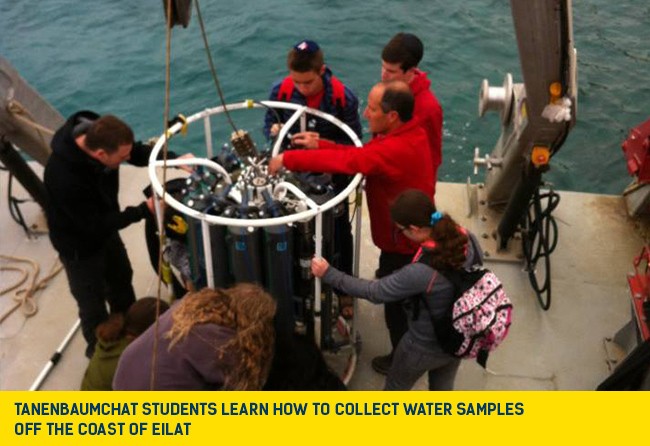 Students from TanenbaumCHAT in York Region have just returned from a unique twelve-day Israel program, studying and conducting research at the Eilat campus of Ben Gurion University.

The research expedition, which saw 30 Grade 10 students make the trip to Israel’s south, was developed in conjunction with UJA Federation of Greater Toronto, which is partnered with Eilat-Eilot, through the Jewish Agency’s partnership2gether initiative.

The program – the first of its kind – was focused on marine biology, taking advantage of Eilat’s distinctive climate, location and ecology.  Working in teams, pupils learned how to conduct field research in a range of areas including oceanography, water ecology and animal behavior.  They worked in laboratories, on the water and even underwater, studying coral reefs, fish, dolphins and much more.

The group visited the Eilat aquarium and underwater observatory as well as Kibbutz Lotam, an ecological community which is conducting pioneering research into water conservation and waste disposal.

“The kibbutz amazed me in several ways,” said group member Arieh Abrahami, “but the most amazing thing was seeing how much the people of this kibbutz care about the environment and sustaining the ecological basis of their lives.”

The group also spent time in Jerusalem and Tel Aviv and visited the town of Sderot, which is located on the Gaza border and has been pounded by rocket fire for more than a decade.

“The program aims to connect the next generation with Israel, while enabling pupils to strengthen vital study skills,” explains Adam Minsky, ‎Senior Vice President of Community Capacity Building, UJA Federation of Greater Toronto. “Offering more than just tours of historical sites, the program combines Israel’s rich history with the innovation and creativity of its academic research institutions, while capitalizing on our long-term relationship with the Eilat-Eilot region.”

Indeed, one of the highlights of the program was meeting Israeli pupils from Eilat who are currently taking part in the Diller Teen Fellows program.  The Canadians and Israelis came together for a desert hike, a barbecue, and an interactive program on the diversity of Israeli society.

“We had a great time playing games, competing, eating and singing with the Diller teens,” said student Anna Feldman.  “We got to solve puzzles, race and work as a team to attain goals.  It was a great opportunity to get to know some people our age who live in Eilat.”

Zane Stekel, another group member, also enjoyed getting to know the Diller fellows.

“We discussed what Israel means to us,” said Stekel. “We did an exercise where there were different maps of Israel on the floor and everyone had to choose the map to which they felt the most connected.  We compared our views on Israel, and it was cool to see the differences.”

The meetings were equally valuable for the Israeli participants.

“These mifgashim were priceless for us,” said Shir Spektorman, coordinator of the Diller program in Eilat. “The Diller fellows felt an immediate connection to the visitors.  They are now even more excited about our seminar in Toronto next month and feel much more connected to the Toronto Jewish community.”

The students were accompanied by TanenbaumCHAT science teachers Ms. Carr and Mr. Kitchen, as well as Rabbi Buckman, head of school.

“As with all the school’s endeavors, this program encapsulates CHAT’s innovative approach,” said Rabbi Buckman. “It promises to set a new benchmark for short-term school programs in Israel throughout North America.”