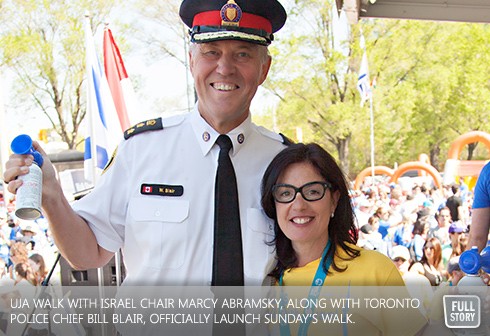 By Daniel Horowitz--Less than 24 hours after four people were killed during a shooting at the Jewish Museum in Brussels, approximately 20,000 people, in solidarity with Israel, including a huge gathering from the Jewish community and others representing the diversity of the GTA, took part in Sunday’s UJA Walk with Israel.

The Walk, which celebrates Israel’s accomplishments and contributions to the world-at-large, as well as Jewish life in Toronto, raised over $900,000 for social services and educational initiatives throughout Israel, while attracting political leaders and representatives from across Canada’s full political spectrum.

“I can think of no better response to the cowardly and unprovoked attack in Brussels, than to see 20,000 people, including mothers and fathers, grandparents, teenagers and babies in strollers, come out today to show their support for Israel and for Jewish life,” said UJA’s Campaign Director, Steven Shulman. “Our hearts go out to the families of those murdered in this senseless act of hatred, and today’s Walk with Israel demonstrates that regardless of these ongoing attacks against innocent Jews, we will never let fear guide us.”

“I am thrilled to see so many young people here today who represent the broad spectrum, and the depth of the community touched by UJA,” Abramsky told the mammoth crowd. “To see bubbies and zaidies with their children and grandchildren melts my heart.  To see our young professionals, Birthright Israel and March of the Living participants continuing their support of Israel with their presence today is totally gratifying. I am confident that the future of Jewish Toronto, and of Israel, is in great hands. I am so proud and excited to chair today’s UJA Walk with Israel, a community event that truly embodies the best of our community. And, finally, on behalf of the children of Israel, so many of whom will see their lives improved as a result of all of our community efforts today, I say todah rabah!”

With those inspiring words energizing them, the 20,000 Walkers left Coronation Park for the 8-kilometre Walk, Israeli and Canadian flags in hand, which transformed the streets of downtown Toronto into a veritable sea of blue and white, and red.