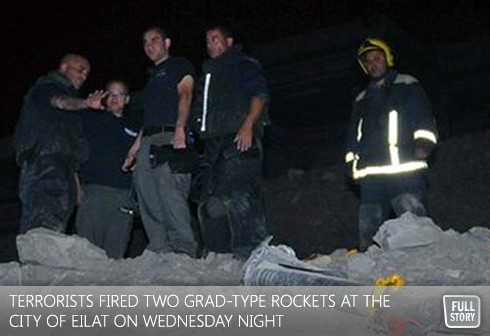 One of the rockets exploded in a construction zone located in a residential neighborhood in the city. Security forces were conducting searches in the area to locate the second rocket. There were no reports of physical injuries or damages.

It is unknown as of yet exactly from the rockets were fired, but officials said it is highly likely they were fired from the Sinai Peninsula.  Shortly after midnight (Israeli time), residents of Eilat reported hearing several loud explosions in the city. Police forces began searching the area in an attempt to locate the source of the explosions.

One of those residents who heard the explosions is Richard Summers, UJA Federation of Greater Toronto’s representative in Eilat-Eilot Partnership.  Below, Richard provides a first-person account of living through a night of rocket attacks.  By Richard Summers--I have the feeling that these reports are beginning to turn in to a regular thing. Eilat - Israel’s holiday capital - was once again rudely awakened to the reality of conflict in the region, as 2 huge explosions rocked the city.

On the exercise routes where the city meets the Eilat mountains, people froze in their tracks not sure of which way to turn. Police closed down an open-air concert that was taking place on one of the southern beaches in Eilat, and an uneasy silence suddenly fell over the city.  Two close friends of mine from the Inter University Marine Biology research institute were quoted in Yediot Ahronot this morning. Yoav, who is from Eilat, said, "I woke up from a deep sleep to the terrible sound of an explosion."

Oren said he heard the sound of two rockets falling. "People on the street just froze in their tracks. It was frightening. Maybe it's time that sirens are installed in Eilat as well."

The confusion, as always, after these types of events, continued for several hours until the rockets final resting places were located. Eilat has returned to a close to  normal state this morning , holiday makers at the beaches, the malls and cafes are full and the sound of music and laughter can be heard from all of the hotel swimming pools, but the local residents seem to be smiling a little less, there is an unspoken tension in the air. What a few month ago would have been talked about as a freak occurrence, maybe even an interesting topic of discussion, is now turning into a nagging feeling that what has now turned into monthly attacks is the new reality and that this is only the start.

As I talk with my friends this morning  the same questions are raised again and again,  what will happen to tourism? Are we going to start living under the constant question mark of when the next grad attack will be? Is Eilat safe for our children?

By the grace of G-D, no one was injured and no damage happened, but Grads are statistical weapons they are aimed a general areas and the more that fall the more likelihood that something will be hit, this is terror in its purest form, you have no warning, it is does not relate to our actions in the area and the rockets fall with no discrimination between civilian or military targets. It seems that the recent placing of an iron dome system in the region may have been in the nick of time.

The residents here are still strong, this morning we are continuing with our daily life and even under the current circumstances the optimism that seems to define this region is still strong.

Thank you all for those who sent emails and maybe shared a prayer.