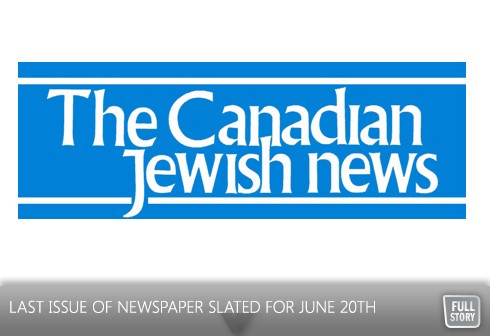 By Daniel Horowitz--After more than four decades as a vital component of Jewish Canada, the Canadian Jewish News announced yesterday that its last issue will roll off the presses on June 20th.

“We are pained to have to make this decision,” wrote Donald Carr, the President of the Canadian Jewish News, in a statement.

“We know the role that The CJN has played in the community for the past 42 years. Notwithstanding our editorial integrity and a cadre of superb writers, we face an evolving society, a different readership and changed demands.

“If The CJN is to be a vibrant part of the future, it will only be as an enhanced and expanded digital edition. That is our hope. However, The CJN will disappear from your mailboxes and the newsstands.  We appreciate the loyalty of our subscribers and advertisers. As importantly, we appreciate our committed staff – some 50 people – many of whom have worked for the paper for so long and with the greatest dedication. Reality dictates to us that “for everything there is a season….”

In response to the unfortunate news, Ted Sokolsky, President & CEO of UJA Federation of Greater Toronto, issued the following statement.

The CJN is a mirror of Jewish life in Canada, often covering stories of minimal interest to mainstream media. Yet, media outlets everywhere carefully read the Canadian Jewish News to gain insight into Jewish perspectives on issues of the day. Through the CJN, non-Jewish Canadians acquired greater understanding of Canada's many Jewish communities.

Although the loss of the CJN's print edition will particularly felt by Jewish Canadians, it a significant loss for Canadian journalism.  We wish the CJN every success in its new online endeavours and we offer our assistance to the Canadian Jewish News in its efforts to maintain the newspaper's  proud tradition online.