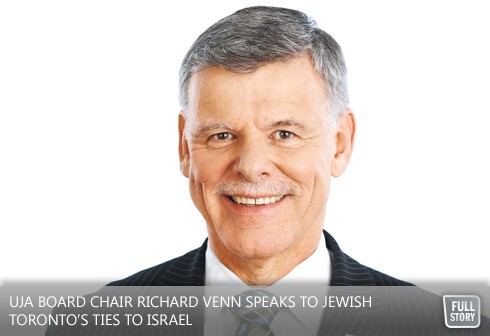 By Daniel Horowitz—Despite rain and cool temperatures, leaders from across Ontario’s political spectrum, along with a number of Jewish leaders, came together at Queen’s Park on Tuesday, April 16 to celebrate Yom Ha’atzmaut, Israel’s 65th,  and to see the Israeli flag raised.

The program, emceed by Howard English of the Centre for Israel and Jewish Affairs, included emotional renditions of Hatikvah and O Canada, sung by a mother and daughter duet as the Israeli flag was raised, an address by Progressive Conservative Leader, Tim Hudak, and a moving speech delivered by Richard Venn, Chair, UJA Federation of Greater Toronto.

“As the Board Chair of UJA Federation of Greater Toronto, I am both honoured and excited to be here today to celebrate Yom Ha’atzmaut, Israel’s 65th anniversary of its independence,” Mr. Venn told those in attendance.

“Even before the establishment of the state of Israel, the unique and powerful bond between UJA Federation, Toronto’s Jewish community and our Jewish state has been – and continues to be unbreakable today.

“As Israeli Prime Minister Benjamin Netanyahu proudly declared when he was in Toronto in 2010 to launch UJA Federation’s Walk with Israel – ‘the ties between Israel and Canada have never been stronger!’

“With the number of challenges that Israel has faced throughout her history, and sadly continues to face today - Toronto’s Jewish community, as it has always done, rose not only to meet those challenges, but soared above and beyond the call of duty.

“And while UJA takes care of Toronto’s most vulnerable Jews, and builds new, vibrant state-of-the-art centres of life across the GTA to the benefit of Jews and non-Jews alike, it continues to assist the at-risk Jews of Israel through a number of social welfare projects across the Jewish state. Through our advocacy partner, the Centre for Israel and Jewish Affairs, we ensure that the voices of Canada’s Jewish community are heard by decision makers in all levels of government.

“It has been said in some quarters that the close ties enjoyed between Canada and Israel are a strange marriage. But the truth of the matter is that, as democratic countries which value human rights and decency above all, it was “beshert” – Hebrew for predestined - that these two great nations would also be great friends.

Having suffered first-hand the tragic consequences of hatred and tyranny, the Jewish people created a nation built on the foundation of justice and human dignity. Upon this foundation, they built a modern, prosperous and free society, one that welcomes and embraces people of all backgrounds and faiths, as we do here, in Ontario, and across this great nation of Canada.

“I am so proud of this tiny country which, despite turning 65 -  an age which most relate to retirement, and slowing down, is quite clearly a young, vibrant and dynamic country that continues to contribute so very much to the world-at-large as a global leader in science and technology, medicine, agriculture, renewable energy, and so much more. Happy birthday, Israel; 65 has never looked so good!”