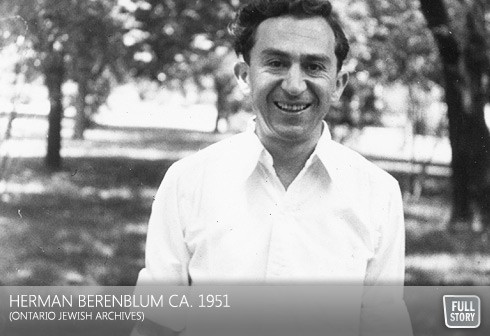 By Daniel Horowitz--Call it a simple twist of fate. Beshert, if you prefer.

The fact is, if fate had not intervened in the life of a young Jewish boy living in Germany many decades ago, life for Herman Berenblum would have been very different.

It was back in the 1930s when a then-young Herman, seeking to have his visa renewed so that he could continue to live with his family in Germany, was rejected by the German authorities. As it turned out, that rejection was probably the best thing that could have happened to Herman and, by extension, Jewish Toronto.

After being forced to leave Germany as a teenager just before the start of the Holocaust, Herman said goodbye to his beloved family, a goodbye which turned out to be the last time he saw or heard from them again. Herman left Germany and made his way to Argentina, which he called home for several years. From there he travelled to England for a brief time before ultimately settling on Toronto as his new and permanent home away from home.

Like many new immigrants to Toronto, Herman found work in the shmatte business on Spadina Avenue, a trade he learned from his late father, a tailor, when Herman was a child.

But, unlike those new immigrants, the vast majority of whom lived and worked in the same part of town, Herman, looking to avoid living in a “ghetto-like atmosphere,” and being reminded of the Shoah which took his family from him, chose to live in Etobicoke, a western suburb of Toronto.

Berenblum, still experiencing culture shock and without any significant contacts, did not succeed immediately, and like many of those starting new lives in a new country, required some assistance. Sure enough, the young newcomer found that help through Toronto’s organized Jewish community which not only helped him financially, but socially, as well.

Eventually, Herman, never having forgotten the people who were there for him, and in a much better financial position, wasted little time in giving back to the community.

Expressing his desire to help Jewish Toronto long after he left this world, Herman ultimately left a legacy gift in his will to the Jewish Foundation of Greater Toronto. Because of his vision, generosity and compassion, the Foundation established two endowment funds; one to support United Jewish Appeal’s Annual Campaign in perpetuity, the other, to support the ongoing needs of  Holocaust survivors.

Although Herman Berenblum has passed away, his memory will live forever. In fact, the corridor of UJA Federation’s Sarah & Chaim Neuberger Holocaust Education Centre, which will be built on Sherman Campus at Bathurst and Sheppard, will bear his name.  Photos taken by a teenaged Herman during the 1936 Berlin Olympics – some of which were displayed at the 2010 Olympic Winter Games in Vancouver - also comprise the Berenblum Photo Exhibit, which can be viewed at UJA Federation’s Ontario Jewish Archives.

Toronto’s entire Jewish community benefited from Herman Berenblum, and will continue to do so for years to come. And it’s all because of one, small twist of fate.