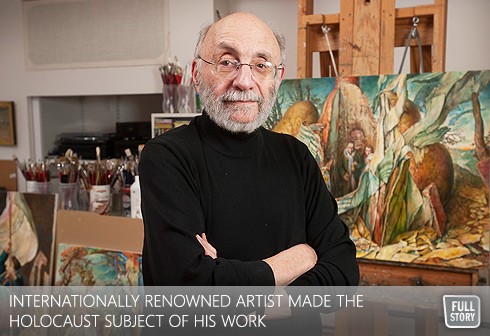 Internationally Renowned Artist Made the Holocaust Subject of His Work

By Daniel Horowitz--Television has been referred to as a “vast wasteland”. But for 86-year-old Torontonian and Holocaust survivor Gerda Frieberg, television recently served as a portal into the past.

The year was 2009. It was 5 a.m. when Gerda, a past chair of Canadian Jewish Congress Ontario Region, a member of United Jewish Appeal’s Atarah Division and, in 1985, the founding chair of UJA Federation’s Holocaust Education Centre - now the Sarah and Chaim Neuberger Holocaust Education Centre - unable to sleep, turned on the set to help pass the time from dark to light.

It was then that she began flipping from channel to channel when, suddenly, she saw a face - a face that took her back more than 60 years.

It was the face of renowned artist Samuel Bak, now 78, a man who Gerda had first met during her time in a Displaced Persons Camp in the German town of Landsberg from 1945 to 1949. She still remembered Samuel as the fresh-faced young boy of 12 or 13 who accompanied his mother on her regular visits to Gerda – the camp’s consummate seamstress - who made many of her clothes.

With every visit to Gerda, Samuel’s mom expressed how she yearned for him to be able to showcase his remarkable gift as a painter. She worried that he might never have the opportunity to fully tap into his talents as the times were uncertain, to say the least. “She was always talking about her son,” remembers Gerda. “She would tell me how talented he was and how she was determined to get Samuel into an art school in Munich. Nothing was more important; she just knew he would become a great artist given the opportunity. I often wondered over the years what ever happened to her son.”

Now, thanks to the show on WGBH Public Television early that morning, which highlighted Samuel Bak and many of his paintings depicting the Holocaust, Gerda’s questions were finally answered. But it was one painting in particular that caught Gerda’s attention.

One of the last paintings shown was, as Samuel explained to the host, from that same Landsberg DP Camp where Gerda first met little Samuel. “This is when I first realized that the artist on this television show could be the son of my old customer,” recalls Gerda. “That prompted me to wait for the credits to roll where I found the artist’s name and the gallery that represented him.”

For more than 40 years, many of Bak’s works have been on display at the prestigious Pucker Gallery in Boston, Massachusetts. “Would you by any chance be the young boy I met in Landsberg?” Gerda wrote in a letter to Samuel after seeing the show. “If so, then your mother’s dream came true; she must have been so proud of you, as any mother would be. I would very much like to hear from you….”

That summer, soon after sending the letter, Gerda was on a plane to Boston to connect with the successful artist. “I had always thought about Samuel, and wanted to reconnect with him after all these years,” says Gerda. “But, until that television show, I couldn’t remember his last name. Every time I saw a painting depicting the Holocaust, I thought it might be his. I was never sure, but always curious. Now, I finally knew for sure.” Gerda, so impressed with her friend’s work, began campaigning to have Bak’s exhibit brought to Toronto.

And, thanks to Gerda’s energy and tenacity, she has turned her dream into a reality. From March 1 to April 30th, 2012, UJA Federation of Greater Toronto presents “Icons of Loss: The Art of Samuel Bak” at The Columbus Centre’s Joseph D. Carrier Art Gallery (901 Lawrence Avenue, West.) This is the first major exhibition of Bak’s work in Canada.

The unique exhibit consists of several dozen important paintings with roughly half of them based upon the May 16, 1943 photograph depicting a little boy at gun point during the liquidation of the Warsaw Ghetto. The other half of the works explore a different icon – Albrecht Durer’s 1514 engraving Melancholia 1. Bak wishes the viewer to dwell on the little boy and the Angel – representing all children and all angels – who, according to Bak, are “our brothers and sisters who have died at the hands of oppressors.”

Gerda, for her part, wishes the viewer to think about “One Child.” In this case, the life of Samuel Bak, that special child she met in the camp. He lived and went on to create a monumental body of work, both artistic and historic in its dimension. “Imagine, she reflects, “if more than 1.5 million children had not been murdered in the Holocaust. Think of what they could have accomplished for our common humanity.”

For more information about “Icons of Loss: The Art of Samuel Bak” contact Shai Abraham at sabraham@ujafed.org or 416.635.2883 ext.5153. Admission to the exhibit is free.