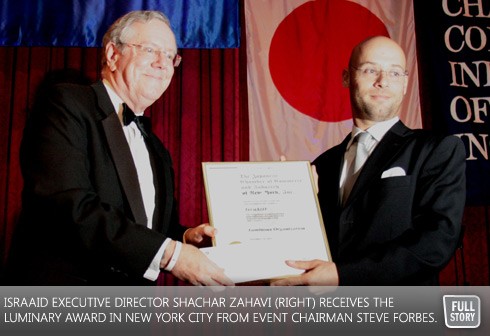 By Daniel Horowitz—IsraAID Executive Director Shachar Zahavi took a bite out of the “Big Apple” recently as his organization was presented with the prestigious Luminary Award by the Japanese Chamber of Commerce and Industry of New York, Inc (JCCI).

The Luminary Award symbolizes the humanitarian spirit of both groups and individuals who have shown leadership in strengthening ties between the United States and Japan, as well as international humanitarian affairs.

The award, along with a $50,000 donation to IsraAID, was presented to Zahavi during the JCCI’s 27th Annual Dinner Gala at New York’s Hilton Hotel.

IsraAID is a coordinating body of Israeli and Jewish NGOs in Israel that provides humanitarian aid worldwide. United Jewish Appeal - the world’s largest financial supporter of IsraAid - has supported its work following earthquakes in Peru and Pakistan, on the border of Darfur, and after Hurricane Katrina, the typhoon in the Philippines and, most recently, the March 11th earthquake, tsunami and subsequent nuclear disaster that devastated northeastern Japan. It was for IsraAID’s remarkable efforts there, on the ground in Japan, that they received the Luminary Award.

Adding to the prestige of the honour bestowed upon IsraAID is the fact that it was the only foreign organization to receive the award.

“The support shown by UJA Federation of Greater Toronto, the Jewish Federations of North America, and other Federations is vital due to the direct link and partnership between the Jewish people that show that such team efforts allows us to provide the best treatment and aid to those in need,” said Zahavi. “This generous gift will fund our post-trauma work that we are still operating in Japan. We are helping school teachers and training Japan’s government officials and medical personal on how to help their people with the psychological effects of the trauma they’ve suffered.  UJA Toronto was the first federation to support our Japan mission which arrived four days after and is still supporting our programming in the field.”

The JCCI is held each year with the intent to strengthen the bi-lateral bonds of friendship and business cooperation that exist between the US and Japan. It’s one of the largest annual events in New York City, and is attended by over 1,000 Japanese and American business leaders.