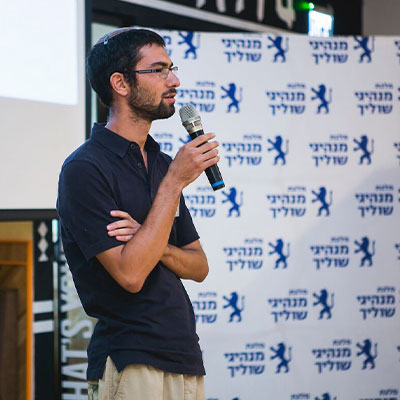 At the start of his undergraduate degree, Tzvi Michelson, a 2017 Schulich Leader Scholarships recipient, noticed that most of his peers at Hebrew University’s computer science program had parents who worked in either academia or STEM (Science, Technology, Engineering, Math). His thoughts quickly turned to the many underprivileged children that lived in and around Jerusalem’s periphery, many of whom did not have access to extracurriculars that related to the STEM field. “We wanted to help children that generally would not be exposed to computer science in any way,” said Tzvi. “Our goal was to get kids excited about computer science and show how it impacts the world, while giving them the self-confidence to know that this is a viable future career option for them.”

Alongside one of his classmates, Tzvi started the Forstart program four years ago through a partnership with the Jerusalem municipality. They have over 100 students participating per academic year, including two groups of Ethiopian students. “We teach them the basics of coding as well as provide school support to students who otherwise would not be able to get the extra help they need,” said Tzvi. “By the end of the year, the students were able to program and play their own computer games, based completely on what they learned in the program. It was very exciting to see, and hopefully, when they’ll be applying for university, they will know that computer science is not something outside of their realm of capabilities.”

Born and raised in Rehovot, Tzvi always had an aptitude for math. Though he did not do much programming until university, he was interested in the growing impact that computers had on every aspect of life. “Every major technological development of the past 30 years has been through computer science,” said Tzvi. “Our world is becoming more and more computerized and it’s affecting other fields, from biology to physics to medicine. The way I see it, computer science is at the crux of moving the world – and that’s where I want to be.”

After graduating high school, he studied at a Yeshiva and later on, spent a year volunteering in South Africa through the Torah MiTzion program, where he worked closely with their local Jewish community in helping support their programming and strengthening their connection to Israel.

In 2017, Tzvi began studying at Hebrew University, doing a double major in psychology and computer science. Going into his first year, Tzvi knew that he would need scholarship support in order to study at university. “I applied to a lot of scholarships, and I ended up being one of ten Schulich Leader Scholarship recipients at Hebrew University that year,” said Tzvi. “The scholarship allowed me to do my studies with a quiet head and completely focus on my schoolwork.”

Tzvi said that the cohort of Schulich Leaders at Hebrew University is very close, giving him access to a network of like-minded people who were passionate about STEM. They all met several times a semester, where a leader would present on an issue that they are interested in and share their expertise with the rest of the group. “Schulich has created a network of very interesting and smart people within the university, and these meetings really enriched my university experience,” he said. This network also had an impact on Tzvi outside of campus, as one of his fellow scholarship recipients helped him get an internship at Google’s office in Israel last summer.