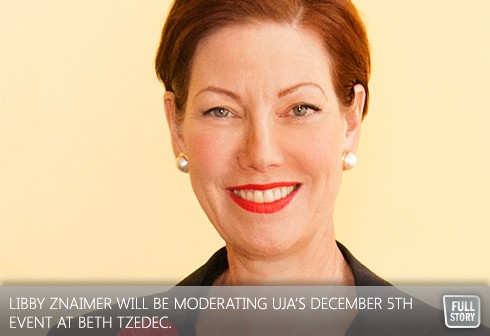 By Dan Horowitz- Long before Academy-Award winning actress Angelina Jolie stunned the world by undergoing a double mastectomy in May after learning she had the “Jewish gene”, Canadian journalist Libby Znaimer was all too familiar with BRCA mutation.

In 2006, Znaimer, like Jolie, tested positive for BRCA2, a genetic mutation that increases the likelihood of developing breast, ovarian and pancreatic cancer. The mutation is especially common among Ashkenazi Jewish women, increasing a woman’s risk of breast cancer by 60 to 80 percent.

“I was not surprised since my mother had breast cancer at a young age, but it was extremely upsetting because I had been cleared on two mammograms just weeks before,” says Znaimer.  “I felt it when I pulled the covers off in the middle of the night and thought “My God, that’s a lump!”

The journalist and broadcaster with CP24 successfully battled the cancer, and again defied the odds in 2008, when she beat pancreatic cancer – a disease with a frightening five-year survival rate of approximately six percent.

“The experience made me realize what a great life I have,” says Znaimer. “I try to remember that every day.”

On Thursday, December 5th from 7:30 pm – 9:00 pm at Toronto’s Beth Tzedec Congregation Znaimer will be moderating a unique and important United Jewish Appeal of Greater Toronto panel discussion featuring three of Canada’s leading physicians, called “The ABCs of BRCA”.  The event will focus on the BRCA1 and BRCA2 mutations, and the effects they have on Jews of Ashkenazi descent, while examining the current state of BRCA cancer research, genetic testing, risk assessment and more.

“These events are very important especially since it affects so many in our community,” says Znaimer. “It is my responsibility to be involved with cancer causes and frankly that job has my name on it, particularly when it comes to pancreatic cancer. Research is very underfunded and the survival rates are dismal partly because there are almost no survivors to advocate. I am very lucky to be here. And I am here because with my case doctors figured out how to treat BRCA-related pancreatic cancer. It responds better than others and it turns out about 5% of pancreatic cancers are genetically related.”

Click here to register online for this important event, or RSVP to Glenda Gomperts ggomperts@ujafed.org or by phone at 416-631-5707.