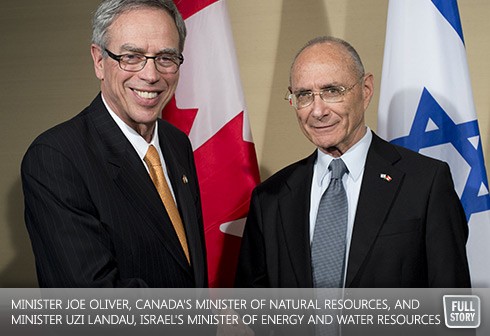 By Daniel Horowitz—On October 28, Canada’s Minister of Natural Resources, Joe Oliver, and Dr. Uzi Landau, Israeli Minister of Energy and Water Resources, announced the establishment of an exciting cooperative venture between the two countries with the birth of the Canada–Israel Energy Science and Technology Fund.

The new fund – to which the Canadian Government will contribute $5 million over a three-year period – will allow Canada and Israel to pursue further cooperation down the road to advance their mutual shared energy interests.

The Government of Israel will provide funds on a project-by-project basis to initiatives in this program, the approval of which will be in accordance with the laws and regulations of the Office of the Chief Scientist in the Israeli Ministry of Industry Trade and Labor (OCS).

Eligible projects for the new Fund will be led by industry but can include academic partners on both sides as research and development sub-contractors to the project.  “This new scientific initiative will create jobs and strengthen the economies of both our countries through greater energy collaboration,” said Minister Oliver.

“Today’s announcement underscores the important strategic relationship between our two countries.”  “In the endeavour to develop Israel’s natural resources, we find in Canada a natural partner to cooperate with and together look for ways to maximize our capabilities,” said Dr. Landau.  During his visit to Toronto, Dr. Landau appeared as the keynote speaker at Shaarei Shomayim Congregation, at an event sponsored by UJA Federation of Greater Toronto, its advocacy arm, the Centre for Israel and Jewish Affairs, and Israel’s consulate general in Toronto DJ Schneeweiss where, among other things, he spoke about the threat of a nuclear-armed Iran.

“A nuclear-armed Iran would be a boon to terrorists, a threat to the Middle East and a spur to encourage other countries in the region to develop atomic arsenals,” Dr. Landau told the 250 attendees of the event. “Iran is not only Israel’s problem, but the problem of the free world and the United States.”