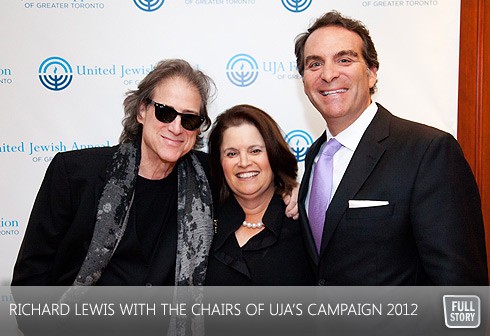 Richard Lewis entertains crowd at Toronto’s Events on the Park

By Daniel Horowitz-- United Jewish Appeal Campaign 2012, chaired by Barbara Bank and Gilbert Palter, kicked off officially on August 23rd at Toronto’s Sony centre with a record-breaking crowd of 2,000 UJA supporters, who were entertained by Jason Alexander of Seinfeld fame.

The huge crowd in attendance turned out to be a harbinger of good things to come for the Campaign, and for Jewish Toronto, which held its closing celebration on February 8.

“If there is one thing I learned this year, it is that the high quality of Jewish life that we all enjoy in Toronto exists largely because of the strength of our annual UJA Campaign,” Palter told the more than 700 UJA supporters at the Closing, held at Toronto’s Events on the Park, and featuring comic and actor, Richard Lewis.

“We tried to make conveying that message the primary objective of this year’s campaign, rather than primarily focusing on dollars raised. And that new approach has really resonated with the community. As of tonight, UJA Campaign 2012 has now surpassed $50.4 million in unrestricted gifts. UJA has raised an additional $3.4 million in designated gifts, over and above donors’ unrestricted gifts, all to the benefit of Jewish Toronto, the people of Israel and the Jewish world. In total, together through the UJA annual campaign we have raised $53.8 million and counting. We look forward to that phenomenal total continuing to rise as gifts come in over the coming weeks and months.”

“This year, so far – as new donors continue to make gifts – we have 1,500 new donors and donors who did not make gifts in recent years, joining UJA’s Annual Campaign,” said Bank. “Together, these new and returning donors have brought more than $1.7 million to our collective efforts to strengthen Jewish Toronto, Israel and the Jewish people everywhere. We must thank our hundreds of canvassers and thousands of volunteers who have pulled together so strongly to make this year a success.  You are the foundation of our great community.”

Lewis, recognized as one of the top 50 comedians of all time, has been entertaining audiences for more than four decades with his unique brand of neurotic comedy.  An accomplished actor with several TV and film credits to his name, is currently one of the stars of HBO’s hit show Curb Your Enthusiasm.

After his stand-up routine, Lewish took questions from the enthusiastic crowd.

The incoming chairs of UJA’s Campaign 2013, Sarena Koschitzky, Bruce Leboff and the chair of Women’s Philanthropy, Laurie Sheff, were also introduced at the Closing.