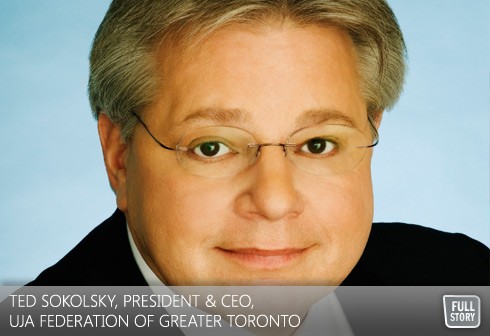 This essay was originally published by the Centre for Jewish Peoplehood Education as an essay in the The Peoplehood Papers.

By Ted Sokolsky - We are indeed living at a time unprecedented in Jewish history. The narrative that defined us for nearly two thousand years, that of a people in exile from our homeland, has come to an end. Even the late 20th Century narrative of a Jewish world balanced by a great American Jewish community on one side and a growing Israeli community on the other is also fading rapidly. In its place is a vision for a new Jewish world, a world in which Israel not only is the spiritual centre of the Jewish people, it now leads the Jewish people.

While the impact of this shift has been recognized in demographic terms (Israel’s Jewish population will soon pass that of the Diaspora’s), the political and individual identity challenges that have come about from this shift have yet to be fully appreciated. The last 60+ years of Diaspora-Israel relationships have been marked by great achievement and great cooperation.

However, in the creation of those achievements stereotypes were constructed that now impede our ability to grow as a People together. Increasingly, we developed paternalistic attitudes towards each other, attitudes often based on ignorance. Diaspora Jewry too often saw itself as the “great provider” of Israeli society, offering financial and moral support to a struggling nation. It was slow to acknowledge the growing economic and social strength of the country and too often fell back on stereotypes that bordered on providing relief to a third-world nation. Israeli Jewry for its part often knew very little beyond stereotypes of Diaspora Jewry.

At times Diaspora Jews were seen as the rich uncle and at times as the selfish half brother. Too often, Diaspora communities are regarded as those that will collapse under the burden of mixed marriage and assimilation or those that are characterized by fears of anti-Semitism. Israelis tend not to appreciate Diaspora communities for the strength of their Jewish institutions or their faith but rather for the size of their pocket books or their extravagant wealth. Recognizing that the balance of power and influence in Jewish leadership has moved irreversibly to the Israeli people, their government and institutions, is a monumental shift.

Communal institutions based on the old paradigm will soon become irrelevant. Curriculum in Jewish schools both here and in Israel that do not recognize this shift are irrelevant already. Clearly in a global Jewish world where Israeli leadership becomes more and more evident and necessary, our concepts of Jewish Peoplehood, for both sides of this partnership, must shift radically. In this new reality, I believe there are at least five essential changes that must take place if we are to nurture and foster a true and modern sense of Jewish Peoplehood. Authentic Jewish Peoplehood will depend on direct dialogue and encounters between both sides. Instant electronic and social media make the old gatekeepers practically irrelevant.

Direct links between communities and individuals will become more and more important. Jewish identity for Israelis and Diaspora Jews alike will flourish when we rediscover each other again. Soldiers who participate in Birthright’s ‘Mifgashim’ programme understand that more than ever. ‘Shinshinim’ who work in our schools, synagogues and summer camps here in Toronto know that too. For those soldiers and the Shinshinim, as well as the North Americans they encounter, their Jewish identity finds deep roots in those experiences that they may have never known previously. National and international institutions that previously controlled the relationship between Diaspora and Israeli Jewry can no longer stand in the way of authentic dialogue and collaboration.

It is an age of “disintermediation” and in this globalized world national boundaries, especially for Jews, will mean less and less. Diaspora Jewry will continue to be active participants in their respective nations but our ties to Israel will play an ever increasing larger role. Local communities that do not nurture and construct direct links with Israel within their infrastructures will not be sustained. Those communities, on the other hand, that deepen those bonds and build those direct links can flourish. Israelis living abroad must be embraced within local Diaspora communities. Within this new paradigm of Jewish Peoplehood, it should be more evident than ever that Israelis living abroad are a vital and essential part of every Diaspora community. Jewish identity in an open society for these Israelis is more important than ever and their leadership and engagement can add to vitality and energy to our Israel-oriented agenda. In many ways, how successfully we embrace those members into our community will be a litmus test and a metaphor for true commitment to Jewish Peoplehood.

We must rapidly update the curriculum of “Jewish Civics” for both parts of the Jewish World. Students studying in our Diaspora schools are working off a decades-old curriculum that doesn’t recognize Israel as a modern 21st century nation. And students studying in the Israeli school system have little knowledge at all about the vibrancy of Diaspora Jewish life. New concepts of Zionism must extend beyond the borders of the State and must be integrated into a full understanding of Peoplehood. In a world where Israel leads the Jewish People it must demonstrate that leadership more and more. Birthright was just the beginning of that kind of leadership. Investing in the Jewish identity initiatives of Diaspora communities will become an increasing role for the Government and people of Israel. Diaspora affairs need to become an integral part of the strategic thinking of the government, not just a passing gesture without real substance.

The strength of Diaspora communities in the decades ahead will depend on how real and tangible our connections to Israel will be. And the strength of Israel will very much depend on the power it can gain and leverage from nurturing those Diaspora communities. In an inter-dependent and truly ‘global’ world, no people is better equipped, better experienced and better conditioned to adapt to this new world than the Jewish People. Now is the time to seize this historical opportunity together.

Ted Sokolsky is the President & CEO of the UJA Federation of Greater Toronto.