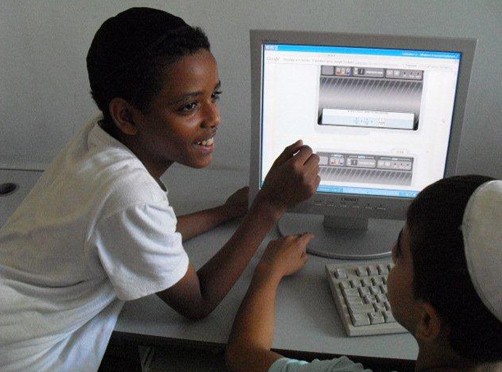 In the 2013-2014 academic year, UJA Federation of Greater Toronto launched its STEM initiative in its Israeli Partnership regions of Bat Yam, Sderot and Eilat-Eilot. The STEM initiative answers the global need of advanced education employment and ensures that Israel plays a key role in its leadership.

While the Israeli Ministry of Education uses the acronym STEM to refer to studies that include, science, technology, engineering and math, it also embraces related fields and the study of the English language.

Despite its location in the center of the country, Bat Yam is in essence a poor suburb of Tel Aviv. It is set within Israel’s socio-economic margins, with almost no industrial or commercial base, and is solely dependent on government funding. Forty percent of the population are new immigrants and only 6% hold academic degrees. Education is chronically under-funded, since government funding is based on the number of students without regard for the residents who largely live near the poverty line.

“While our partnership with Bat Yam is continuing to embrace the absorption of thousands of new immigrants primarily from the France, Ethiopia and the Ukraine, it is simultaneously being nationally recognized by the Israeli Ministry of Education for its achievements in education,” says Adam Minsky, President & CEO, UJA Federation of Greater Toronto. “UJA Federation and Bat Yam share in the pride of the Partnership’s recent accomplishments.”

Over the past decade within the framework of the Bat Yam/UJA Federation Partnership, the matriculation scores of high school students have increased from 50% to 82%. This is the highest score of all the more affluent cities in the center of Israel and above the national average of 66%.

Bat Yam was the first Israeli city to incorporate the use of personal electronic notebooks loaded with the school curriculum as one of the advanced learning tools alongside Smart Boards to be used in the classrooms. There are over 3,000 children who bought the notebooks. But to provide this learning tool to the poorer immigrants from Ethiopia, immigrants from the war torn Ukraine and other vulnerable Israeli’s whose parents could not afford the cost, the notebooks were provided by generous and compassionate teenagers celebrating their bar or bat mitzvhas with The Jewish Foundation of Greater Toronto’s B’nai Tzedek Teen Philanthropy program.

Elementary schools have scored higher than average on national scholastic testing and four schools won the Israel Prize for Education. Six of the ten high schools were recognized by the Ministry of Education as some of the best in the country.

Bat Yam was selected by Microsoft Israel to be the national platform for Microsoft 365, recognizing the educational leadership of the city and the significant achievements of the past few years focusing on STEM education through the Partnership with UJA Federation of Greater Toronto, The Ministry of Education and the Bat Yam Municipality.

In tribute to Bat Yam’s STEM education revolution, Microsoft Israel has given every school child and teacher a free license for the Office 365 software, creating a rich innovative teaching and learning experience, developing essential life skills and nurturing curiosity for learning and knowledge.

UJA Federation of Greater Toronto has helped lift the educational programs and facilities in Bat Yam into the 21st century. Thousands of students between the ages of 7-18 have benefited from programs including Advanced STEM Excellence and Cracking the Glass Ceiling which provide tools to succeed in science studies.

Advanced STEM Excellence provides over 350 elementary school age children every year with accelerated STEM studies at the Bat Yam Excellence Centre which is generally only available in cities where parents can afford to pay for this enrichment privately.

“Cracking the Glass Ceiling” is a unique program designed to promote young women from underprivileged areas, in the 8th Grade and lasting over 5 years in the school, to STEM. The program provides the participants with the tools to reach a quality matriculation that will open doors to a variety of options in the future. This is achieved through empowerment, role-modeling and scholastic assistance. In three short years UJA Federation has helped this program reach over 700 girls and is still growing.

The Partnership equipped four school-based science –technology labs and a Centre for XLN 3D Printing and is developing four more school based labs this year.

Ester Perron, Deputy Mayor who holds the Education portfolio for the city is proud of the recent achievements and awards.

“Our great achievements were made possible by the faith and investment that UJA Federation has in the Partnership,” says Perron. “Bat Yam is now producing students whose scores are well above the national average. The Partnership is helping advance studies in Physics, Chemistry, Biology, Technology and English. The impact is also evident in the physical transformation of the science facilities. Education is the number one priority of the Bat Yam UJA Federation of Toronto Partnership; together we are leading the way for the young generation despite their economic hardships to have equal opportunity education in order to take their place on the shoulders of Israel’s science and high tech leadership.”

The successful advancement of STEM Education in Israeli society is an issue of paramount importance for the future economic and social resilience of Israel. With the exception of the recent discovery of natural gas fields the only natural resources Israel has are its human resources.

The Toronto Bat Yam Partnership has enabled thousands of children to peer through a microscope for the first time, assemble a robot and even develop WEB sites. By opening their horizons we ensure a better future for everyone, truly tikkun olam.

Bat Yam once recognized for its crime and violence is today recognized for its vision; with education and tolerance at its core. The Toronto Bat Yam Partnership is a successful model for other cities to follow in immigrant absorption and integration and incorporating STEM education into all the schools and age levels, ensuring these immigrant and vulnerable Israeli children can compete on level ground for a more secure future with children from more affluent families and cities.