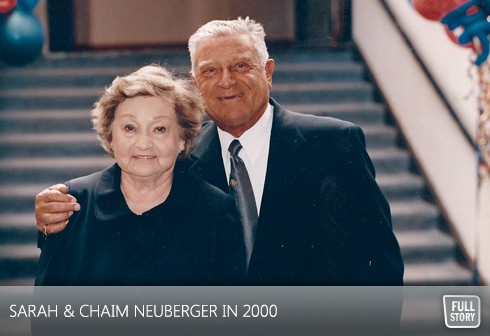 By Daniel Horowitz--On Tuesday, September 25th, as we prepared for Yom Kippur, a bright light in the life of Jewish Toronto was forever eclipsed.

As we readied to make our way to synagogue, word came that Chaim Neuberger had passed away at his home. The courageous, visionary and generous community leader’s gift to UJA Federation’s Tomorrow Campaign made possible the creation of a new state-of-the-art Holocaust Education Centre for UJA Federation’s Sherman Campus, located on Bathurst Street, just north of Sheppard Avenue.

Upon completion, the Sarah and Chaim Neuberger Holocaust Education Centre will help to ensure that the memory of the six million Jews who died in the Shoah will live on, while welcoming as many as 100,000 visitors annually.  In 2008, when Chaim announced his generous gift, he made his reasons clear:

“Educating people of all faiths about the Holocaust is so important to me; after all, I’m a part of the Holocaust,” said Chaim, whose entire family – his parents, four brothers and one sister, were all killed by the Nazis.

“I was the youngest in my family and they were all taken from me and murdered. Holocaust education is so important because nobody lives forever, including my generation. We need what happened documented, so people can see the facts, the photos … We need to tell the stories. There are those out there who even deny that the Holocaust ever took place. We want to build this centre so that all people, of all ages and all nationalities, will learn the truth, and learn from the lessons of the past.”

Chaim only managed to escape the same fate due to the heroic selflessness of a non-Jewish Polish family who took him in - along with nine other Jews - and hid them for nine months in a tiny bunker - only 3 meters by one meter - closets and even a horse stable, where Chaim would often sleep under piles of straw and hay.

“I remember the family very well – Victor and Josefa Kotowicz - may their memories be a blessing, they were obviously very generous,” said Chaim. “Josefa would always prepare proper meals for us and slide them through an opening in a closet, or wherever we were hiding at the time. It was this way for all those months until the Russians came and we were all liberated. If the Nazis knew what this family was doing, they would have been killed along with all of us. They gambled their lives for us.”

For years after the war ended, Chaim expressed his gratitude by regularly sending money to the family that saved his life.  After the war, he decided to leave Poland, travelling to Austria and Italy before ultimately making Canada his home.  It was thanks to a special initiative by the Canadian government that sponsored Jewish orphans that Chaim came to this country in 1948.

After docking in Halifax, he went to Montreal before ultimately deciding to give Toronto a try. His instincts proved correct as, within just a few short years, he began to find success in the city’s booming building business.  He also found personal success, with his wife of 46 years, Sarah. The couple had two daughters – Edie and Myra – and eight grandchildren. Sarah passed away ten years ago.

“Chaim Neuberger left a legacy of leadership, compassion and caring,” said Ted Sokolsky, President & CEO, UJA Federation of Greater Toronto. “Not only did he build for the future for his family, he did what the greatest community leaders through our history have always done, he built for future generations, and he ensured that, through the centre that bears his name, and the name of his beloved wife, the lessons of the Holocaust will never be forgotten. It amazes me that a man who endured so much tragedy was still so full of compassion. What a tremendous legacy Chaim has left.”

The Neuberger gift will ensure that the voices and legacies of Chaim, Sarah and other Canadian survivors will be preserved and transmitted to future generations through multi-media, exhibits and public programs.  Honey Sherman, the Chair of the Sarah and Chaim Neuberger Holocaust Education Centre, praised the Neuberger family for their commitment to education.

“This gift enables the Centre to expand its reach to multiple communities and generations of Canadians and beyond,” said Sherman.  “With quiet dignity, Chaim Neuberger was a true and visionary leader.  The new Sarah and Chaim Neuberger Holocaust Education Centre will be a beacon of understanding and inspiration.”

The Centre’s Executive Director, Mira Goldfarb, who took on the role shortly after the Neuberger gift for the new facility was made, reflected on the importance of this investment in the future of Holocaust education.  “It is a true privilege to work with our leadership in making the Neuberger vision a reality,” said Goldfarb.

“The Centre has grown from strength to strength with the dedication of remarkable founders and volunteers to remember the past and educate for the future. The Neubergers have created a tremendous opportunity for us to fulfill, in the name of Sarah and Chaim z”l, for the benefit of all.”

“Chaim Neuberger could not erase the sadness of his European past,” said Rabbi Baruch Frydman Kohl in delivering  Chaim’s eulogy. “He didn’t talk about it or dwell on it with his family. But he didn’t despair; he carried his memory forward, enabling the story of European Jewry to live on through the Sarah and Chaim Neuberger Holocaust Education Centre.”

The family has requested that memorial donations be made to the Sarah and Chaim Neuberger Holocaust Education Centre by calling 416.635.2883 Ext.5153