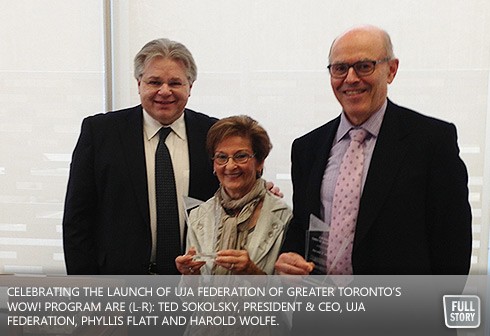 By Daniel Horowitz--It’s hard to imagine that in a community as strong and vibrant as Jewish Toronto, there are still some 20,000 school-aged children, between the ages of 4 and 17, who are not engaged in Jewish education.   Recognizing the opportunity – and the need - to engage these youngsters, UJA Federation of Greater Toronto’s Centre for Jewish Education is spearheading a new, exciting and innovative project that will transform supplementary Jewish education across the Greater Toronto Area, and double the number of students in the next three years.

Representatives of the Centre for Jewish Education recently joined with two of Jewish Toronto’s most committed and generous community leaders, brother and sister Harold Wolfe and Phyllis Flatt, to announce the launch of the new initiative called “WOW!” And based on the anticipation of this new program, “Wow!” is precisely the reaction expected from parents and students alike.

“When I was growing up, I attended supplementary school, cheder, as it was then known,” explained Mr. Wolfe.

“That education did not have much of an effect on me, however, I was fortunate to grow up in a family and in an environment where being Jewish was an important part of my life.  My father took me to shul on Shabbat and all Jewish holidays; my mother observed the Shabbat. And we lived in a Jewish community, so I was very aware of being Jewish. But today, conditions are not the same. Even if a child attends Jewish day school, there are many competing influences that distract him or her from being aware of their Jewish tradition.”

The WOW! Project is a collaborative community initiative to engage greater numbers of children and families in satisfying and impactful supplementary Jewish educational experiences by enhancing what exists and expanding the range of program options to meet the needs of 21st century Jewish learners.

“With the generosity of the Wolfe and Flatt families, and a significant commitment from UJA Federation, we are supporting new programs downtown, in Thornhill Woods and beyond, that are going to transform our community over the next three to four years,” said Ed Segalowitz, Executive Director, UJA Federation’s Centre for Jewish Education.

“Soon, new options and programs will be available to, and introducing the joys of Jewish education to virtually half the young Jewish families across the GTA.”

“UJA Federation of Greater Toronto is committed to sustaining and strengthening Jewish life in the GTA,” said Craig Rimer, a Board Member of UJA Federation and its Centre for Jewish Education Committee.

“Our future depends on a community that embraces Jewish values, understands Jewish learning, and can confidently stand up and identify as Jewish. To this end, UJA Federation seeks to maximize the number of community members in our education system since we believe that, in providing meaningful Jewish educational experiences to our children, we can be secure that our children will identify as Jewish in the future. And, Jewish children grow up into future Jewish leaders.”